In many arid regions, lakes act as critical reservoirs for agriculture, livestock, and wildlife. With an increase in local population, these lakes are under increased threat from over-demand of water resources. The rapid shrinking of the Aral SeaÂ is an excellent example of the consequences of water use exceeding water input.

This project will combine time series of SAR image data from the Sentinel-1 constellation with altimeter data from the Sentinel-3 sensors to evaluate volume loss in selectedÂ dryland lakes. Of particular interest are smaller lakes (Sarygamysh Lake andÂ Malheur Lake will be used as examples) and it will be studied how the limited resolution of Sentinel-1 SAR and Sentinel-3 altimetry data affects the quality of derived volume change information.

InSAR image pixels are correlated as a function of distance due to atmospheric delay. If ignored, this correlation can cause significant biases when using InSAR data in geodetic inversion problems. Often, the InSAR covariance isÂ modeled as an exponential function that is decaying with distance. In theory, the parameters of this exponential function can be determined by fitting variograms to interferogram areas that are free ofÂ geophysical deformation signals. This approach fails for many volcanic islands, as most of their coherent areas areÂ affected by surface deformation. Hence, this project is attempting to developÂ an iterative approach toÂ estimating InSAR covariance information for volcano islands.

This project will work in collaboration with the Alaska Satellite Facility (ASF) to integrate the hazard monitoring-relevant SAR techniques InSAR and RTC processing into ASF’s cloud-based processing engine Hyp3. Once integrated, this hazard monitoring work flow can be invoked (either manually or using an automatic trigger) to produce deformation maps and change detection maps for a range of natural hazard events. It is the goal of the project to then share generated hazard product with the public via a standalone web interface.

The project goals include: (1) IntegrateÂ already available automatic processing flows for InSAR processing and Radiometric Terrain Correction (RTC) within Hyp3; (2) connect these workflows with external hazard triggers such as the USGS earthquake notification service; (3) store produced InSAR and RTC products in a local archive; and (4) share these products with the world via a web-interface. 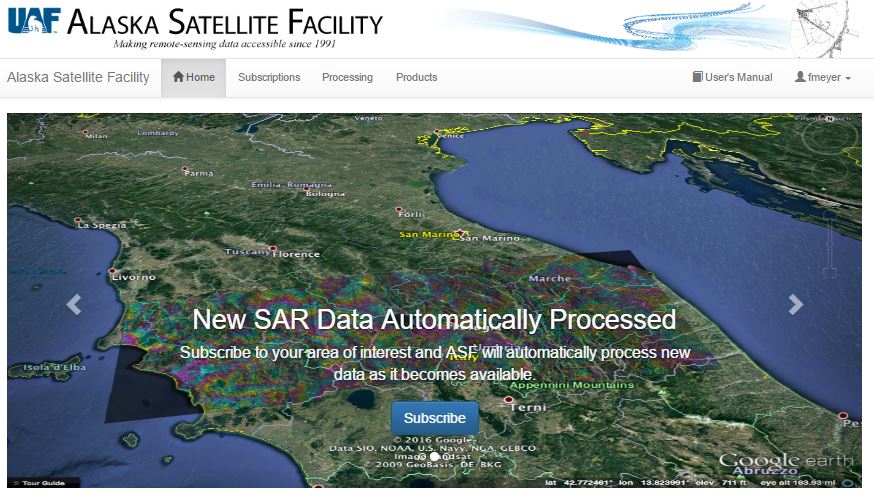 This project analyzes InSAR time-series data at Bezymianny and Tolbachik volcanoes, Kamchatka, to determine if there may be any detectable link in deformation signal between the two volcanoes. Nearby Klyuchevskoy volcano is very active and therefore it may be difficult to isolate any signal of Bezymianny from other volcanoes in the Klyuchevskoy Group. In previous work, Tolbachik and Bezymianny were shown to likely have some sort of connectivity at depth based on isotopic signatures. The geometry and specific depth of any dike-like features is still inconclusive but may range between 15-30 km. The student proposes building upon previous work at Tolbachik and the Klyuchevskoy Group by using Sentinel-1, Sentinel-2, and ALOS data. 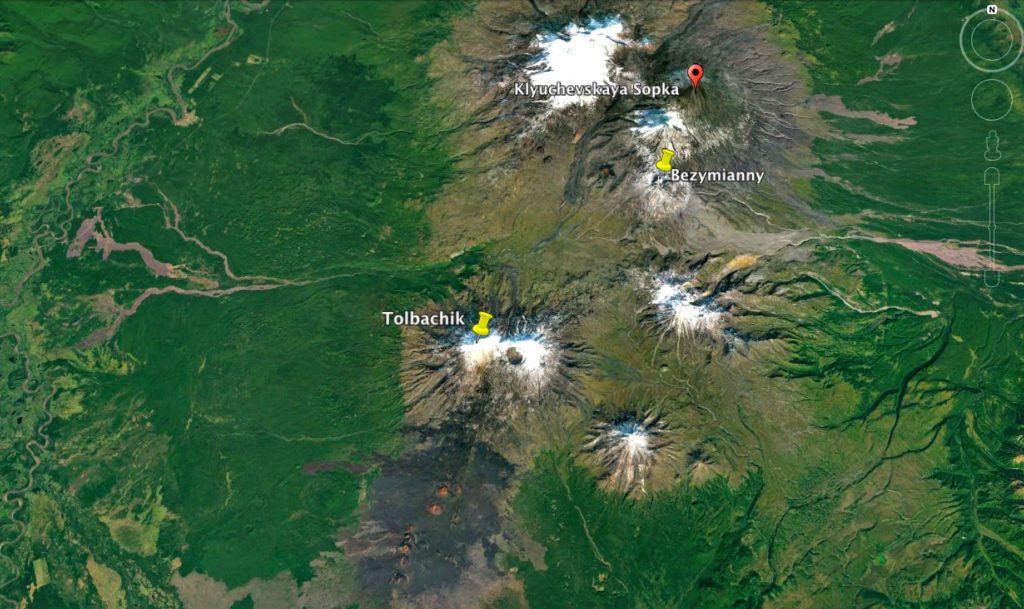 It has been shown in recent work that wild fire events in Arctic environments can lead to a drastic changes in the active layer and the underlying permafrost regime [e.g., Iwahana et al., 2016]. Â These changes can lead to significant surface deformation that may threaten local infrastructure. This study will use Sentinel-1 InSAR data to study how recent wild fires in Alaska affected permafrost change-related surface deformation. Most emphasis is put on recent burns in the Fairbanks North Star Borough area. 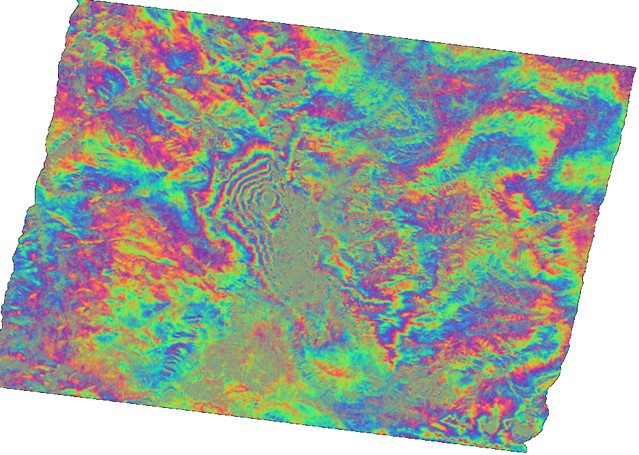 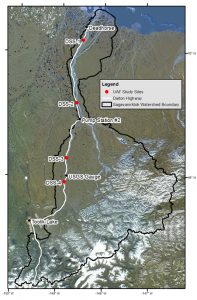 Gravel extraction along the Sagavanirktok River, Alaska during the construction of the Dalton Highway and Trans-Alaska Pipeline has led to changes of the river’s hydrology and dynamics. The objective of this project is to analyze changes in the river’s width, roughness and seasonal hydrology related to theÂ construction of the named pipeline and highway. To do this analysis, the project will utilizeÂ the 39-year SAR archive of the Alaska Satellite Facility. The work flow of this project includes the identification of images (starting with Seasat (1978)), the geocoding of all images to a common projection and the analysis of images for temporal trends. 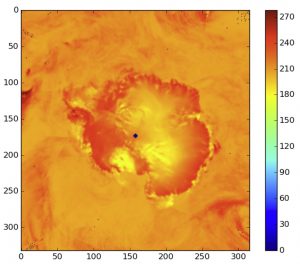 This class project will be to use passive microwave data to quantify melt season length along the Antarctic Peninsula. The goal is to assess changes in season duration throughout the last 20 years. TheÂ project will especially focus on the Larsen C ice shelf, although the developedÂ method could also be applied to the rest of the antarctic coasts and ice shelves.

This project will be based on Special Sensor Microwave/Imager (SSM/I) data. The dataset is available through the services of the National Snow and Ice Data Center (NSIDC) and can be downloaded from here. This dataset provides daily polar coverage since 1987 with 25km resolution on 19H, 19V, 22V, 37H, and 37V frequencies. While there is also higher resolution data available from this sensor (85 GHz or 91 GHz in H & V polarizationÂ with 12.5km resolution), those frequencies will only tell us about melting that is much closer to the surface.

This project will be looking a fire scars in the Fairbanks, Alaska area and will evaluate the benefit of PolSAR and InSAR data for evaluating vegetation type and vegetation regrowth for these scars. Validation information for SAR-derived data may be available through the LANDFIRE and Monitoring Trends in Burn Severity (MTBS) programs of USGS. SAR data will include ALOS PALSAR and Sentinel-1. 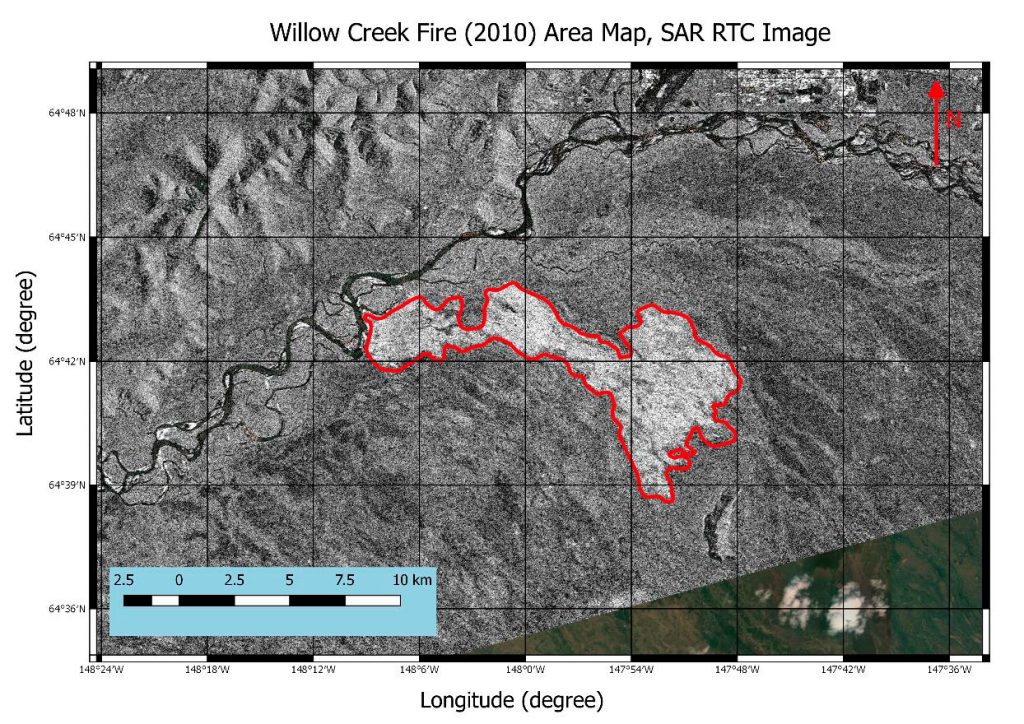 This project is aimed at mapping 2017 landslides in the Santa Cruz Mountains, California using InSAR techniques. Goal is to evaluated how much information can be extracted about these landslides from Sentinel-1 InSAR observations.

During the winter of 2017, central California was inundated with heavy precipitation from atmospheric rivers.Â  At one point, mudslides, sinkholes and washouts caused road closures on Highway 17, Highway 152, and both north and south ends of Highway 9, stranding mountain community residents, and restricting travel out of the coastal communities to a single 75-mile route circumventing the mountains. Identifying slope instability and areas prone to slope failure in the area may help future planning of new development and road construction avoid placing housing and infrastructure in the most hazardous areas. Hence, this project will assess the benefit ofÂ InSAR techniques using on Sentinel-1 data to identify regions of high ground deformation that would indicate that a landslide has occurred.

Storms taking a toll on roads in the Santa Cruz Mtns. 26 mountain roads impacted by sldes and downed trees. pic.twitter.com/NYnFfhphdT

The goal of this project is to evaluate techniques for the improvement of DEMs available for planetary bodies such as Venus. Studying volcanic systems on Venus is of great interest to the research community, however, limited DEM resolution on Venus is limiting these studies to larger volcanic edifice. This study is using terrestrial analyogs (both volcanic and sensor analogs) to evaluate techniques for DEM improvement using SAR.

This project will be led by two students: The first part of the project will evaulate Shape from Shading (SfS) techniques to estimate residual topography once an initial (low-resolution) DEM was removed from the data using Radiometric Terrain Correction (RTC) processing. An iterative approach is envisioned where DEMs are updated in iterations until residual DEM estimates are below a threshold. The second part of the project has to do with DEM quality evaluation. Following the hypothesis that after RTC processing radar brightness variations across a volcanic edifice should diminish as DEM quality improves, statistical parameters about radar cross section variation will be derived to evaluate DEM quality. 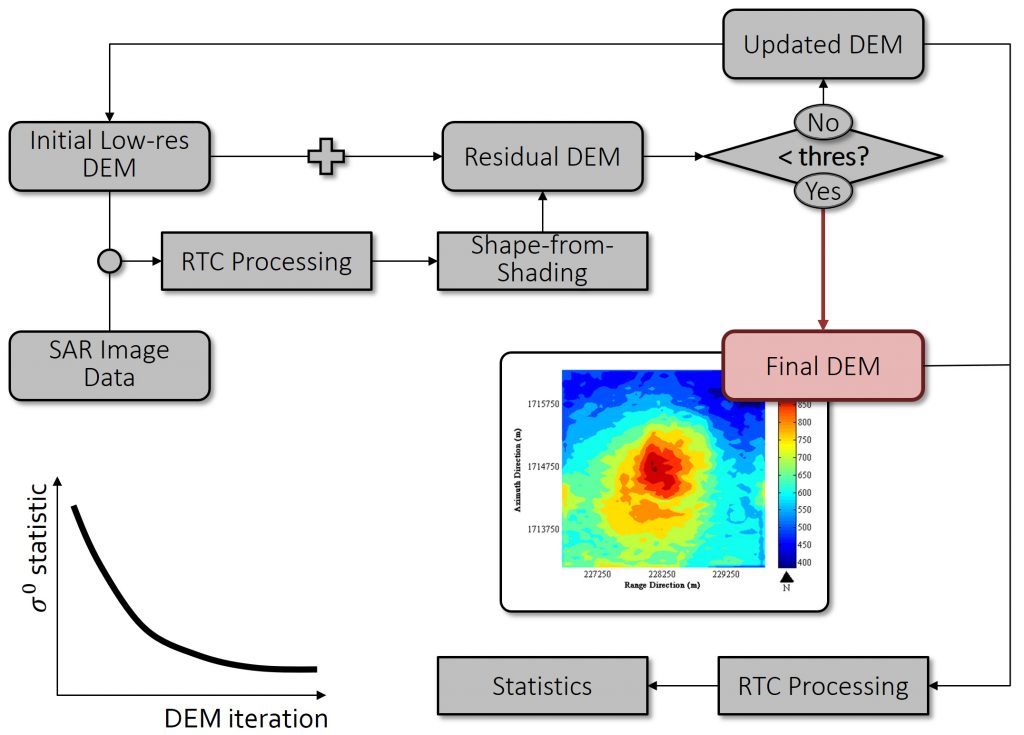